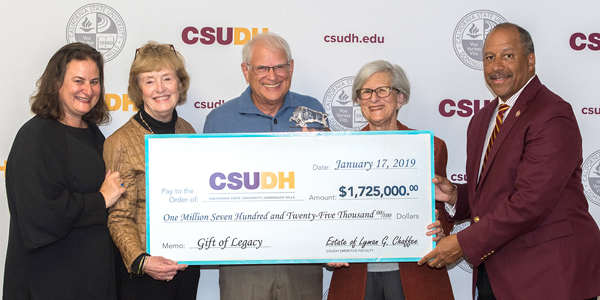 California State University, Dominguez Hills (CSUDH) has received a $1.725 million legacy gift from Professor Emeritus of Political Science Lyman Chaffee, who passed away April 27, 2018. The bequest will be used to establish the L.G. Chaffee Endowed Chair of Global and Comparative Politics, the first endowed chair position in the university's history.

The gift was formally presented to CSUDH by the surviving family of Lyman Chaffee on Jan. 17 during a check presentation reception hosted by CSUDH President Thomas A. Parham. Other university administrators in attendance included Michael Spagna, provost and vice president for Academic Affairs; Philip LaPolt, dean of the College of Natural and Behavorial Sciences; and Kim McNutt, dean of the College of Extended and International Education.

Chaffee's siblings, Marta Stang and David Chaffee, proudly shared stories of their brother Lyman and the impact CSUDH had on his life. 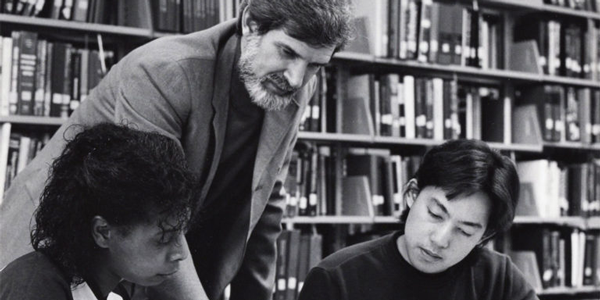 "When he was young, Lyman spent a year in Spain that had a real impact on him. It introduced him to the many benefits of international relations and travel and how important it is for students to experience it, particularly those interested in politics," said Marta Stang, Chaffee's sister. "That first trip to Spain continued to influence him and led to his conviction that student travel not only broadens a person's understanding of the world, but also the issues faced by different countries and their cultures. This resulted in his endowment of a chair in the Political Science Program, as well as funds for students to study abroad."

Chaffee's gift, the largest given to CSUDH by a faculty member, also specifies $100,000 to endow a scholarship for political science majors to study abroad; a $25,000 contribution to the Del Amo Scholarship that provides students scholarships to study in Spain; and $100,000 to CSUDH's Office of International Education toward its general endowment for scholarships for students studying abroad.

Chaffee, a resident of Hermosa Beach, joined the CSUDH 1969 and retired in 2005. During his more than 30 years as a member of the Department of Political Science, Chaffee served as department chair for several years and was honored with the university's Outstanding Professor Award for his commitment to students. He was highly respected among his colleagues and university administration throughout his tenure.

Chaffee was an expert in international politics with a particular focus on South America, Spain, and Portugal. His deep interest in learning about and experiencing other cultures inspired him to travel extensively throughout his life and visit more than 70 countries. He regularly shared his love of travel with his students. For a number of years, Chaffee served as director of CSUDH's International Programs and as resident director of the CSU International Programs study abroad option for Spain.